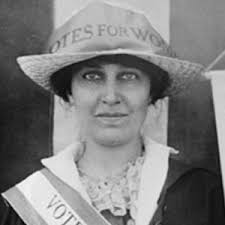 Katharine Dexter was the first woman to get a science degree from the Massachusetts Institute of Technology, graduating in biology in 1904. The curriculum was research heavy and besides the demanding work, she had to petition the college twice—once for permission to work in chemistry laboratories without a hat and again to be allowed to wear a shorter skirt. The reason for the later—she didn’t want her dress to drag across the unclean floors. Her plan was to go into medicine.

Smart and well-to-do Katharine captured the attention of handsome, athletic Stanley McCormick, an heir to the International Harvester fortune. His nervous personality put her off at first. He worried about everything from his mother to masturbation. However, he presented her with a doctor’s report confirming that he was healthy. She became convinced that all he needed was a kind, stable woman in his life and together they would have heirs to both their dynasties and the money to make the world a better place. Thus, she gave up surgery to become a wife. They had a fairy-tale wedding. The happily-ever-after never came. Neither did the heir as Stanley refused go to bed at night.

Two years into their marriage, Stanley was diagnosed with schizophrenia and for the rest of his life lived in the care of doctors at Riven Rock, a family estate in California. Katharine was determined to stick with him out of a sense of duty. He was at odds with his famous family and she was the only person to champion for his care. Sadly, his condition was blamed on his mother and Katharine, like all women, were kept from him. She went twenty years without seeing him in person, although she observed him from afar on many occasions. She remained hopeful for a cure. Her loyalty had another motivation– to keep other men away. She was remorseful about her unscientific carelessness that prompted her to marry unwisely. She didn’t trust herself to make a good decision in matters of the heart. Instead, Katharine McCormick became a powerful advocate for women’s rights.

The McCormick name alone opened doors that she walked through boldly, meeting with legislators ad writing letters to the editor promoting women’s rights. She also worked behind the scenes doing bookkeeping and consulting for the National American Woman Suffrage Association-later League of Women Voters. Her efforts contributed to the successful passage of the nineteenth amendment allowing women to vote in the U.S. Shortly after, Katharine met with Margaret Sanger and began a new campaign—legalization of contraception in the United States. She funded Sanger’s pamphlets about birth control and was able to assemble a team of influential people including doctors, Winston Churchill, and Mrs. Maxfield Parish to support legalized contraception. Katharine was closely involved in opening the Clinical Research Bureau, providing birth control under the guise of medical study. When the Bureau ran out of supplies, Katharine traveled to Europe, claiming to need a new wardrobe. There she purchased over a thousand diaphragms and had them sewn into her new clothes. Upon her return, she tipped the porters graciously and supplied the Bureau.

Birth control gradually became legal in the United States. Yet it wasn’t until 1952 that she made her greatest contribution. At the age of 77 she was introduced to scientist Gregory Pincus, founder of The Worcester Foundation for Experimental Biology where he had been developing a hormonal method of birth control. Although she had never worked as a scientist, Katharine was familiar with hormone literature. She had searched in vain for a cure for Stanley and was convinced that his ailment had a hormonal basis. She was a person with the understanding and the money to support the development of an oral contraceptive pill. With her funding and her scientific coaching, the birth control pill was developed and made legally available in 1960. The United States saw a sharp increase in the number of women attending college in the years following.

Katharine funded an MIT women’s dormitory, which is credited with increasing the enrollment of women into the university and promoting visibility of women in science. She contributed to scholarships for female physicians at Stanford. She funded endocrine research, supported mental health facilities, and donated to the Chicago Art Institute. She changed modern life forever, improved lives, and lived to be 92—long enough to witness it all.

Note: a new study suggests B vitamins ease schizophrenia and that lack of B vitamins might prompt hamsters to eat their babies. Schizophrenia is more common in children of older fathers.  Stanley’s father was in his late sixties when Stanley was born. It’s also suspected that it has a genetic component that is activated in the womb.