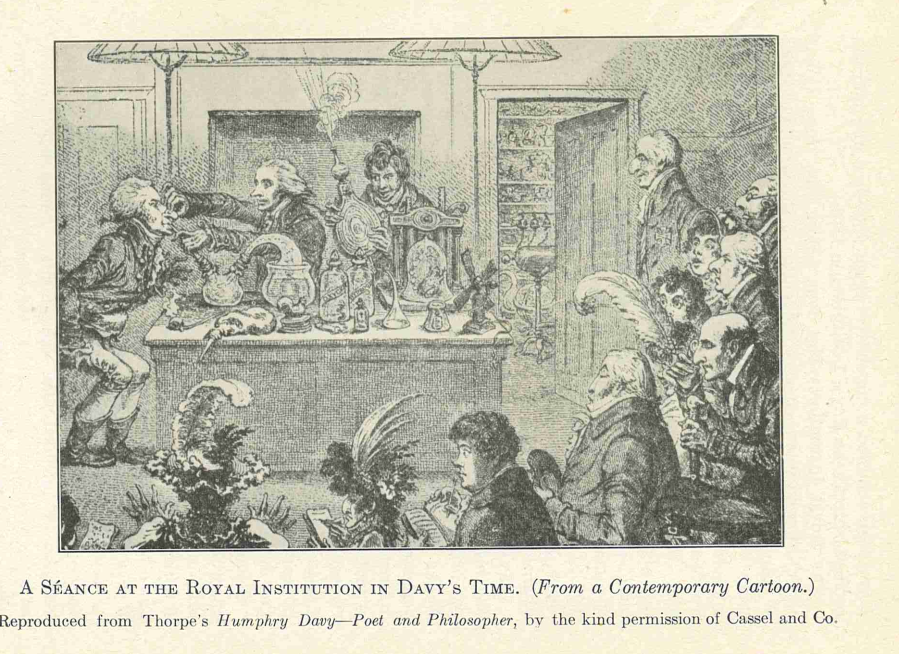 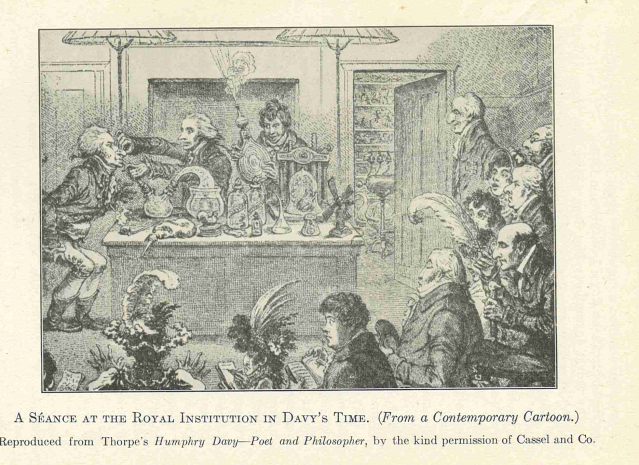 Laughing Gas, nitrous oxide, was first created by Cornish chemist Humphry Davy in 1799…although some credit the reclusive Joeseph Priestly with this. In any case, it was Davy who brought laughing gas to the world and with it, won prestige.

Humphry Davy was born the son of a farmer and wood-worker. The athletic and garrulous Davy was not the best of students. He was, however, good at preparing remedies for a local doctor and even better at making explosions and gases intended to affect people’s health. Gases were created chemically and collected in silk or later, rubber bags and people took sucks of the bag while holding their nose to receive treatments. One use of gases Davy explored was as anesthetics.  The only anesthetics in those days were alcohol and opium. Surgeons had to operate quickly–amputating limbs in a minute or two–three at most.  The use of laughing gas as an anesthetic was slow to catch on– it wasn’t until 1844 that it became used by a dentist and not until the 1870s that use became routine. (The man who pioneered its use in dentistry later became deranged.)

Shunned as an anesthetic, the euphoric properties of nitrous oxide made it a popular party drug, sometimes administered in traveling entertainment tents bearing Davy’s picture. Davy called nitrous oxide inhalation “pleasurably thrilling.”Others have described it as “you’re all rubbery and relaxed and silly laughing usually. The rooms can seem to be collapsing and spinning but in a fun way with sort of swooshing wavy sounds.”  The nitrous oxide promotion propelled Davy into fame–it was a fad that won him a prestigious appointment to the Royal Institution in 1801 at the young age of 22. In this capacity, he lectured and popularized science to the point that he was knighted at the age of 34 and later made a baronet.Davy also discovered ether and chloroform. Although he did help his assistant Michael Faraday achieve fame, Davy clung to his superiority as if he had been born into it.

In retrospect, nitrous oxide has some harsh side effects. It can suppress vitamin B12 uptake, destroy your body’s Vitamin B12,  and cause brain damage if over-used. There have even been cases of paralysis and spinal degradation in frequent users. However, as anesthetics go, it is one of the safest. Perhaps this brain damage created his snobbish treatment of Michael Faraday later in life. Faraday attributed some of this to his high class wife, Lady Jane. (My Mom used the term”Lady Jane” to refer to a snotty attitude but it has taken new meaning these days).Lady Jane and her money can be thanked for numerous portraits of the handsome Davy in those pre-photography days. In any case, I digress.

Laughing gas is used today in dental offices where it eases the pain and anxiety that come with dental work. It’s used to aid the torment of childbirth and can create “giggly, happy women during birth.” It’s used as a whipped cream propellent and also as a recreational drug known as “whippet” and “Hippie Crack.” It can also be found in fumes from burning coal and is a greenhouse gas.

We now know that nitrous oxide keeps nerve impulses from reaching their target. It blocks the gap between the nerve endings. Ketamine acts in the same way.  It also causes the release of opioid-like hormones and increases blood flow to the brain. It should be used infrequently. It hampers both male and female fertility. Indeed, neither Davy or his pupil Faraday had children.