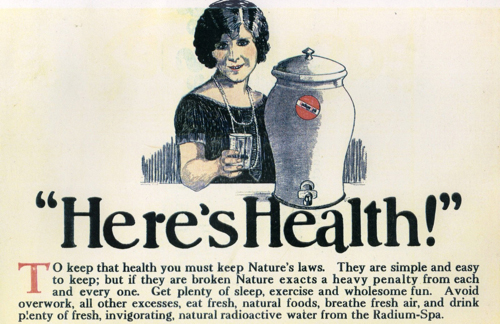 You’ve no doubt heard of radon in basements. Where is radon prevent? Here is a radon map.  The United States doesn’t have much radon compared to other countries. It’s common in many states, especially in the North. Iowa and North Dakota are the two  totally Zone 1 states. That means that here in Iowa, it’s hard to avoid this odorless, colorless, harmful gas. It’s inside and out, concentrating in low lying areas and clinging to dust particles. Inside it can reach harmful concentrations and promote lung cancer.

What is radon? It’s a non-reactive element, in the same family as helium and neon. It hangs in the air as a solitary atom. It doesn’t like to form chemical bonds. The problem is, it’s the big cousin to those elements. It’s heavy. It would NOT float a balloon. Big elements, those with an atomic number of above 81, aren’t stable. They decay and toss off radioactive particles as they strip down to something lighter. And for radon, its light form is lead. So not only does it beat on your lungs with energetic particles as it decays, it goes through a series of forming dangerous atoms, and it’s not too nice when it settles down as a lead atom. Here it is on the periodic table, Rn, radon. There is also an Ra, radium–kind of confusing. Radium is related to calcium. Radon, the one we are talking about, can be in water but exists as a gas. Because it is a gas, you breath it in. That’s a problem. Radon’s atomic number 86 so it’s a big one! (Carbon by example is 12.) But not so big that you can wear a particle mask and keep it away. It’s got a bad size. Where does it come from? Heavy atoms tend to be found further down in the ground and radon comes from uranium break down. Uranium has atomic number 92. It’s a solid and tends to stay where it’s put. It lets off the gas of radon. (And also helium.)

In retrospect, I wasted time waiting until the basement was done to get after the radon. I have decided that patience is over-rated! We put down radon sealant on our new floors and thought that would be enough but no, It worked in some rooms but not in others. In fact, by adding a drainage system and two sump pumps we probably made our radon worse.

Curious about radon your house? The first step in figuring out if you have radon is to do a short term test. In this test, the radon is collected on carbon, which can suck things in and get them to stick The small package of carbon sits in your home (basement in my case) for a few days is sent to a lab and measured. Want to buy one? Look up “radon test kit.” They aren’t expensive.

The next step–if your reading is high– is to call a radon specialist. This person will probably put some radon monitors in the lowest level the home to see where it is most concentrated.

No surprise. Ours was-concentrated in the root cellar/tornado shelter/bomb shelter. It was less so in other spots in the basement but the average level was too high.

One thing we had going for us–we don’t have any duct work in the basement. We kept our radiators. The duct work for the air conditioner is in the attic. This means were were not blowing the cellar radon around the entire house as can happen with radon. On the other hand, the radon in the basement wasn’t going to go anywhere without help. And we go down to the cellar during tornado scares and store things down there.

The takeaways from my experience are this:

Don’t wait to test for radon.

When you sign a contract to have it removed, have both a level of reduction AND a completion date specified.

To read about my results, go here.